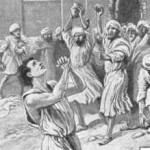 Every culture has moral principles that are contradictory to those in some other culture. This is as obvious as saying Italians like spaghetti and Sarah Palin can’t pronounce the word “nuclear”; with one major difference- moral views change over time. This changing of what constitutes social and individual ethics is embarrassingly apparent to even the most dogmatic of believers in supernatural gods. There is, however, an enormous degree of cognitive dissonance clouding the perception of this change. Take, for example, this common exchange that one might have with the average moderate Christian .

Me: Hi. Do you condone the use of force as justified in your holy book?

Moderate Believer: Oh no, that’s interpreting the Bible wrong…our book is the one that’s filled with kindness and love, remember? (Wink), Goshdarn it!

Me: But the book clearly says that you should put to death people in utterly barbaric ways, for insignificant and sometimes ridiculously stupid actions.

Moderate Believer: Well, you see sir, this book here was written over 2000 years ago for a primitive people who did not understand much about the universe. We are to take what it has to say metaphorically, or some of it at least as I’d like to cling to the parts that aren’t disputed yet. You see sir, God has his way of revealing the universe…

So, although people’s actions are primed to capitalize on this constantly changing moral understanding, one that is informed by reason, they often fail to file away the fact that their understanding of morality is constantly evolving. Every super-naturalist religious belief-system (that I am aware of) preaches an absolute morality. They have clearly gotten the facts WRONG!

This brings us to an interesting question concerning the evolutionary value of such a belief in an immutable morality, if there is any value at all. Is the belief in a static/ absolute morality adaptively useful for our survival, or is it a by-product of some other essential trait?

I have treated the subject of the evolutionary origins of religion in general to a similar analysis here. The terms are pretty straightforward, but let me explain. If something is adaptive, then that thing helps increase the fitness of that individual, thereby causing itself to become fixed in the population. This can very well explain our belief in an immutable ethics; the belief in an absolute morality may have been adaptively advantageous to our social evolution in primitive societies. The other alternative is to hypothesize that the trait is actually a by-product of another more adaptive trait.

The reason this question is so important is that the results have tremendous influence on our day to day lives. If it turns out that the belief in an unchanging morality is essential to our social functioning, this has an impact on how we engineer social policy. If not, we are free to build coherent moral systems that take into account the exponentially increasing knowledge from reason that informs us and shapes our ever-changing understanding of what constitutes morality. In other words, we can embrace the change.

One thing must be made clear: Religion can no longer have it both ways.

Throughout history religions have taken credit for progressive movements that promoted a more ethical view, despite the fact that they imposed that very same inhumane social conditions that they purport to change. Let me use an example to make this point. Consider Spanish colonialism in South America. In the 14th century, the Spanish justified their brutal conquests as necessary actions in order to convert the Native Americans to Christianity. Jared Diamond, in Guns Germs and Steel, writes about how among the leaders of the conquistador armies there were Bible wielding priests who claimed the natives as subjects of the Queen of Spain under the auspices of the Vatican. Fast-forward to the 1970’s and Liberation Theology. This humanitarian school of thought within the Catholic Church attempted to intertwine Christianity with social causes such as human rights, equality and poverty. What has resulted is a populist movement that has 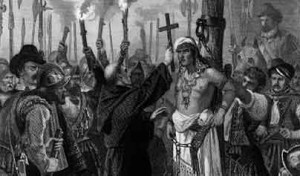 liberated thousands while whitewashing the horrific deeds committed in the name of religion.

Religion has this habit of co-opting whatever moral understanding that rational understanding brings. Thus Archbishop Desmond Tutu used Liberation Theology in South Africa to gain support for his anti-apartheid movement and Rev. Martin Luther King Jr. used his revised interpretation of Christianity to call for an end to segregation.

Was it really religion that was responsible for this change in people’s opinions about slavery, colonialism and segregation? Of course not. It was the understanding and empathy that comes with rational thought that brought about this transformation in people’s minds. In fact, Christianity explicitly condones slavery and considers it part of the natural order. Yet millions of African Americans and Native Americans are able to compartmentalize this disconnect and continue to believe that their religion is all good and inextricably tied to their hopes for a better future.

It is our duty to hold the believers to a truth standard. They cannot choose to eat the cake and keep it too. Either their holy books mean the violent, misogynistic, racist, homophobic and downright silly things that they say, or they are completely irrelevant and not worthy of any respect. It is disingenuous of believers to keep moving the bar of what constitutes acceptable action while still proclaiming their books as immutable truth.

Let’s make sure that in the future when the atrocities of the Hindu caste-system have been vanquished, we will understand that reason and humanism were responsible for the revolution, not Hinduism in some sterilized form.