The cow is, at the least, an animal domesticated by man for help in agricultural activities.[1]  Although the mighty machines now used in farming have made these animals irrelevant in agriculture, valiant attempts are being made, at least in India, to preserve the exalted position of the so called ‘second mother’ [2] or even ‘mother of the world’ [3,4].

The stringent agitations to protect the ‘cow-mother’ [4,5] and even riots and murders of dalits for the sake of the cow,[6,7] suggest that the human life is far less important than a dead cow in this part of the world.[7] This extraordinary reverence for the cow has led to the development and marketing of many ‘products’ made from the secretions and excretions of the cow, with claims that these products may be more ‘lucrative’ than even the dairy.[8] 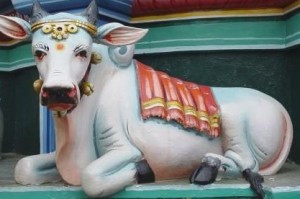 The list of ‘products’ developed from the milk and excreta of the cow is quite long. Panchagavyaand cow urine distillate (gau arka) are the most quoted of these preparations.

Panchagavya is a blend of five (pancha) products obtained from the cow (gavya = from gau) – the dung, urine, milk, ghee and curd.[9,10] Three preparations of cow’s urine, namely gau-mutra asav (fermented preparation), gau-arka (or distillate) and Ganavati (or tablet) are also used as medicines.[8,11] Two US patents have also been obtained for the gau -arka [11] and this fact has been highlighted over and over again.

Various products from the cow have been suggested as a successful remedy against more than hundred diseases, from fever to cancer.[8,11,12] Panchagavya is most reverentially used as a ‘body and soul cleanser’, following the birth or death of a family member. It has also been suggested as a medicine and more profusely as a pesticidal spray for plants and as a soil enriching manure.[10]

Very recently, panchagavya has been suggested as a remedy for chikungunya as well.[13] Cow’s urine has been used in the preparations of hair oil, shampoo, skin cream etc.[8] Preparations like soap, nasal powder, body powder, body cream, incense sticks, tooth powder etc. have been prepared from the cow dung and recommended for medical use[8]. Probably to add sanctity to the entire gamut of these ‘medications’, it has been claimed that Indian pure breed cows have ‘immunology power’ from 90% to 98% while the cows of mixed breed have less than 40%.[11]

Curious to know about Panchagavya, I asked an Ayurveda physician about its utility. She briefed me about all the virtues of the gau mutra (cow’s urine), gau maya (cow dung) and Panchagavya, quoting the Charaka Samhita. But how can we, living in the 21st century,  rely on an ancient text to justify the use of these excreta, I wondered. All these have been well studied by Charaka, she told me. May be, but the concept of biochemical molecules (and the modern biochemical analysers) and of microbes (and the means of isolating them) were non-existent during Charaka’s time, I countered. But the cow’s urine hasn’t changed since Charaka’s time, she averred. I was dumbstruck!

Most articles on the virtues of cow’s excreta extensively quote from scriptures and the Charaka Samhita. Here are some of these arguments:

Recently a lot has been written about the patents for cow urine; one obtained on the basis of laboratory studies (on culture plates and cell lines) on the usefulness of cow urine distillate in enhancing the efficacy of antibiotics and anti cancer drugs, [14,15] and the other patent obtained for cow urine therapy.[16] There are reports of the use of cow’s urine therapy from Myanmar [17] and of a cow’s urine concoction used as a traditional remedy for convulsive seizures in Nigeria.[18] There have also been reports of studies on the cow’s urine distillate in gouty arthritis, lymphocyte and polymorphonuclear cells and carbon tetrachloride poisoning, all done on experimental animals in small numbers.[19-22] These results have been extrapolated freely and wild conclusions have been drawn about the ‘magical powers’ of the cow’s urine in treating almost all the diseases afflicting mankind today.[14,17] Even the Department of Animal Husbandry of the Ministry of Agriculture, Government of India, has published reports that seek to promote the marketing of cow’s urine as a therapeutic agent.[23]

Faced with this blitzkrieg of marketing of cow’s urine and the real danger that cow’s urine and other products of cow’s excreta may be pushed into the throats of hapless patients, with active support from the govt., agencies., it is time we look into the facts.

One need not go far to see the hypocrisy of the ‘cow urine promoters’ than have a look at the ayurveda texts themselves, extensively quoted as the primary source of support for the utility of cow’s urine as a therapeutic agent. All three major ancient texts of ayurveda, by Charaka (1st-2nd century), Susruta (3rd –4th century) and Vagbhata (7th century) mention of the therapeutic uses of beef[24,25] as well, but this fact is no where mentioned by the proponents of cow’s urine. Eating beef is a sin and drinking cow’s urine or eating its dung brings health, if these self-styled guardians of ancient Indian tradition are to be believed.

What about the much touted patents for cow’s urine? A patent is a set of exclusive rights granted by a state to an inventor to prevent or exclude others from making, using, selling, offering to sell or importing the invention.[26] Nothing more, nothing less. A patent in itself cannot be the proof for the utility of any product. It is hardly surprising that while International patents have been registered for cow’s urine and its products, no such patent has been obtained from the Govt. of India. An Indian patent may not make enough and weighty news, but an international patent, on the other, helps to claim that even ‘foreigners’ have accepted the virtues of cow’s urine! 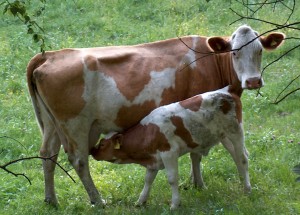 conducted in the labs and on animals or tissues. There are no reports of any controlled, double blind clinical studies in humans, other than some anecdotal reports and claims by the practitioners of ‘cow therapy’ and all these so called claims of research appear dubious by any scientific standards.[27] Most of these papers contradict their own claims: the claims made about the gold and copper salts in urine, for example, are not supported by the data provided by the protagonists themselves.[8,28]

Urine is urine, the liquid waste that is filtered by the kidneys and excreted through the urinary system. It contains many solutes and biological products that are unnecessary for the living body and hence excreted and also some substances secreted by the urinary tract to facilitate this excretion. Chemical constituents of human and animal urine are almost alike.[28,29] For example, Urokinase is an enzyme secreted into the urine to prevent its clogging; today, it is extracted from human urine and used to dissolve clots in the coronary arteries in patients who suffer a heart attack.[30] Does this justify drinking one’s own urine in case of a heart attack? Far from it.

Is cow’s urine safe for mankind? There are reports of severe adverse effects, even fatal, of drinking cow urine concoctions, further supported by experimental evidence.[31] Cow’s urine can also be a source of infectious diseases, especially leptospirosis, [32] that can spread through oral mucosa. The claim that cow’s urine and cow dung have antiseptic properties is not only baseless, but also dangerously misleading. While cow dung (and all fecal matter) is teeming with bacteria excreted from the intestines, several bacteria have been isolated from Panchagavya too.[33,34] Application of these bacteria-rich excreta onto wounds may lead to life threatening sepsis. Only those who are absolutely ignorant about such facts can daringly market cow’s excreta as antiseptics, but the tragedy is that some practitioners of modern medicine, blinded by their faiths in their ‘spiritual heads’ or ‘Mathadhipathis’ also appear to support such nonsense.

The claims of the efficacy of cow’s excreta (and their products) in the treatment of almost every disease are not supported by any evidence and there are no clinical trials reported on the use of these products in human beings. With reports available about the possible adverse effects of the use of cow’s excreta, it is shocking that such products are being allowed to be not only marketed but also trumpeted, even supported by the agencies of the govt. of India, as the ‘cure-for-all’ wonder drugs.

Propaganda regarding the utility of cow’s excreta largely emanates from the obscurantist and Hindu fundamentalist forces and appears to be designed to condemn the ordinary human beings into ingesting cow’s excreta under the alibi of ‘treatment’ and ‘long life’. This is not surprising at all, given the several instances of the down trodden dalits forced into eating even human excreta by the same fundamentalists.[35]

Eulogising the cow (and not buffalo and other cattle that are equally ‘useful’) as ‘second mother’, ‘God mother’, ‘mother of the world’ etc., largely because it provides milk,[11] (and hopefully not because of its excreta) raises a fundamental question about the concept of motherhood itself: Do we love and respect our own mothers solely because we have been breastfed and is motherhood only about milk?

This entire exercise of marketing the cow’s products and promising huge economic benefits (a claim not supported by any data) of keeping the cows even after they have passed the age of secreting milk  is part of the grand design to prevent the slaughtering of the cows so as to deprive the poor sections of the society from quality meat as well as some economic benefits of marketing the beef. But sustaining the livestock is proving to be very costly for the environment, with a large share of global warming attributed to the livestock.[36,37] It is time we take a rational view of all the issues involved.