Why do you criticize Hinduism more than any other religion? This is a question often posed to us – the rationalists, secularists and atheists in India- by the proponents of Hindutwa?

The first time I heard this question it was not from a hardcore Hindutwa proponent, but a medical doctor in Kerala. It was in the late 1980s, when we, a group of young rationalist activists, approached this doctor for financial contribution towards a conference organized by our organization. We tried to explain our position telling him about the number of occasions when we had led campaigns against fundamentalists belonging to other religions, the number of publications brought out by rationalists in Kerala criticizing the religious texts as well as the obscurantist practices followed by Muslims and Christians. Our doctor, however, was not willing to lend his ears to our arguments and we were thrown out of his clinic with him refusing to give us any money.

Over the last two decades since then I have faced this question quite often, forcing me to think about it frequently. Let me hence enumerate the reasons why I find myself criticizing the beliefs and rituals of Hinduism more often than those of other religions.

1. The very first reason that comes to my mind is a question of statistics. More than 80% of the Indian population is Hindu. Naturally, more than 80% of our criticism would also be directed against the belief system of Hindus.

This is precisely the case in other countries too. I read quite a few well-known rationalist periodicals published from the US and Europe. In all these periodicals, most of the articles are devoted to criticizing Christianity, because that is the religion that the majority of their population follows. Wouldn’t it be irrational to criticize the rationalists of these continents as prejudiced against Christianity?

2. Second is my familiarity with the religion I was born into. I am more familiar with the beliefs, tenets, rituals, and practices of Hinduism than that of any other religion, and hence I am more confident in criticizing it.

So is the case with other rationalists, who were brought up among people adhering to other religious denominations. The writings of a Salman Rushdie, an Ibn Warraq or a Taslima Nasrin, for instance, are more frequently directed against Islamic fundamentalists than those belonging to other religions. (It should be emphasized here that I am not trying to elevate myself to the stature of these eminent writers).

The question of statistics referred to above once again comes into play here. Assume that one percent of any religious community in India become rationalists and start criticizing their parent religion. In India, according to Census-2001, we have 80.4% Hindus, 13.4% Muslims, and 2.3% Christians. This percentage would naturally get reflected in any given group of rationalists and, as a consequence, in the rationalist literature produced in India.

For instance, I have noticed, in Kerala, where I was born, the followers of Islam are much more liberal than many other parts of India. It is not possible for any section of a people, religious minority included, to be completely outside the sphere of influence of the society they are part of, however much the fundamentalist leadership is against it.

4. Fourth, the criticism coming from within a community is much more effective than those coming from people outside the fold. This is because criticism, however constructive they be, coming from people from outside a community would tend to be construed as xenophobia or even outright communal. In a perfect liberal-secular society, this should not be the case and every criticism, wherever it comes from, would be adjudged on its innate worth.  But ours is not such a society. It still has a highly conservative, semi-feudal setup with a significant presence of religio-fascist elements intolerant of any kind of criticism.

For instance, in Karnataka, at the time of my writing this, a violent intimidation is being unleashed against Christians by fascist Hindu outfits such as Bajrangdal. Churches were ransacked, religious statues broken, and nuns physically abused. One of the ostensible reasons cited for this attack was that a certain Christian sect allegedly had published a book in Kannada (Sathya Darshini) denigrating Hindu religious figures. Excerpts from the book reproduced in Deccan Herald (September 18, 2008, Bangalore) shows that they are nothing in comparison to the celebrated rationalist-reformer E.V.Ramaswamy Naiker’s acerbic textual criticism of characters in Ramayana. Though the Hindu-right did agitate against EVR and his Periyarana, it never took such a violent turn as has been happening in Karnataka at present. One of the reasons for the less-violent reaction to EVR’s work was he was seen as an “insider” as against the Christian critique of Hindu religious texts. (I am not suggesting even for a moment that the intimidation of Christians seen in various parts of Karnataka today is a Hindu-reaction to this book.  It is not. According to Deccan Herald, the book was printed in a press that was closed down a decade back. The attack in fact is a pre-meditated attempt of the Sangh Parivar to communalize Hindu society in Karnataka on the lines of Narendra Modi’s Gujarat).

5. The fifth and most important reason is the brutal fact that the Hindu fundamentalist forces (RSS, VHP, Bajrang Dal, Durga Vahini, etc) have been on the rise since the late 1970s.

The formation of Janata Party government (which included such disparate political formations as socialists and rightwing Hindutwa elements) in 1977 after the infamous emergency gave legitimacy to forces such as RSS. Since the 1990s, Hindutwa forces have used extreme violence to intimidate minorities and secularists. The violence in 1990 following the Ratha Yatra of L.K.Advani, the demolition of Babri Masjid in 1992, the 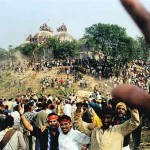 state-sponsored violence (in which more than a thousand people were murdered) against Muslims following the burning of a train in Godhra in Gujarat in 2002, the continuing (even at the time of penning this essay) violence against Christians in various parts (especially in Orissa and Karnataka) of the country, the attempts to saffronise education and secular institutions during the NDA government, the attacks on exhibition of paintings of MF Hussain, etc are ample evidence of the presence and rise of Hindutwa fascism in the country.  There is no point in calling myself a rationalist if I do not take a stand against this fascist intimidation and violence and speak for the rights of the intimidated.

I hope the above satisfactorily answers the question posed at the beginning. It is quite possible that other activists campaigning for secularism may have many other reasons to cite in addition to what I have attempted to point out. I would be glad if they come out with their arguments.