From since my childhood I have had the habit of visiting saints and self-proclaimed religious men with ‘superpowers’. It was probably in the year 1964, when I was still in my teens, that I met Balak Brahmacharithrough a friend of mine from Baranagar in Kolkata.

I had heard about this ‘Baba’ earlier; he was known to have tens of thousands of disciples. ‘Brahmachari’ is a common name for saintly and celibate ascetics. He was very popular; his name spread from Bengal to the whole of India during his heyday, the craze lasting for about two decades.

My friend Gora from Baranagar in the outskirts of Kolkata knew about my strange hobby. He told me that he had once witnessed the astounding power of Balak Brahmachari. Let us hear from him:-

“One evening, on the occasion of the Baba’s birthday there was a gathering of thousands of devotees at a school building in Baranagar; I was one of the volunteers managing the crowd of visitors. A middle-aged man entered with two young sons aged about ten and twelve. He was eager to meet the ‘Baba’. He knew that ‘Baba’s’ mantras could cure all ailments. His sons were deaf and dumb. He was restless. Baba would come and whisper his magic words into the two boys’ ears, he said. The anticipated moment came and the Guru entered. In the mean time, thousands of visitors had gathered out of curiosity to see the boys. The man touched the Guru’s feet and made his request. Baba embraced the boys, pulled them close to him and whispered something into their ears. ‘Did you hear me?’ he asked them. ‘Yes, Guruji, I could hear you’ said the boys in unison in clear Bengali. There was an emotional frenzy swaying the crowd. Tears rolled down the cheeks of many a devotee. The gentleman fell at the Guru’s feet.”

Now, this was interesting and I had to investigate.I accompanied Gora one day to the Balak Brahmachari’s Ashram in a posh locality in Kolkata. There were many visitors waiting in the ground floor hall. Baba would see them upstairs in his room when their turn came.

Gora and I were waiting at the ground floor hall and I became friendly with other visitors. One of them was a well-known educationist who claimed to have once seen a miracle.

One day while waiting he was very hungry and told the Baba so.

The baba told him that he would bring food before slowly fading into a glow of mystic light. From the light appeared golden plates filled with sweets of delicious taste and flavour.

I asked him, “was there anyone else other than you?” No. He was alone in the room.

Anyway, after some time, we were called upstairs to a similar hall. Baba dressed in saffron silk was seated on a tiger skin. We sat and saw people coming in and leaving. Some were bringing in flowers, and some, sweets. Some brought water in bottles which the Baba blessed by dipping his big toe in them! How disgusting! I thought. This was supposed to be ‘blessed’ holy water, charged with the magic power of the dust of his feet; something the devotees treasured and craved for! One of the attendants of the Brahmachari Baba who was watching everyone, asked me to go and meet the Baba and touch his feet. I went up to him and said – ‘we touch someone’s feet to show respect. I can have respect only if I get the right answer to my question. Only then will I touch his feet.’ Brahmachari signaled with his hands and wanted me to stand at the corner of the room. I waited until all the followers had come and gone. I was alone with my friend Gora and the attendant. Balak Brahmachari called me close to him and asked with a mysterious smile ‘What is your question?’

I said, ‘Where was I yesterday at 7 in the evening?. He sent Gora down so he could speak to me alone, and then asked the attendant to close the door behind him as he left. The Baba started talking to me about various things – my home, my family etc. 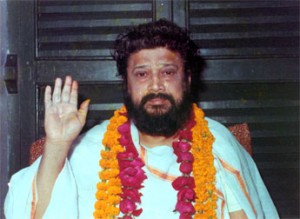 All on a sudden the attendant entered the room and asked ‘Baba, a woman has come, she is in terrible pain. Her gall-bladder is to be operated on. She wants to see you before the operation.’ At first, Baba refused to see her and asked to wait. Next time when the attendant came again, desperate to fix an appointment, the woman allegedly thrashing about in acute pain, the Baba agreed. ‘Okay, bring her’, he said visibly irritated.

Two men brought the suffering woman and laid her down at the Brahmachari’s feet. He ordered the men to wait downstairs and asked for a pot of water. He put the pot of water on the woman’s back. The attendant had gone back and I was the sole witness.

Balak Brahmachari started chanting some mantras and once in a while stopped to throw some flower petals into the pot. After some time he asked me to check if the water in the pot had turned hot. I checked and found that it was hot indeed! He instructed me to lift the woman up and make her stand. She was tottering for some time. Baba told me to make her run. With utmost effort she walked hesitantly, and then ran a few steps and fell at the Brahmachari’s feet. ‘Baba, I’m Okay. My pain is gone’ she exclaimed. Guruji smiled benevolently. ‘Go home. You need not go to the Nursing Home’ he said.

Brahmachari smiled at me. ‘Come often, you will see more such miracles. Do you have faith in me now?’ I said obstinately – ‘No Baba, I haven’t got the answer to my question. Only then will I have faith.’