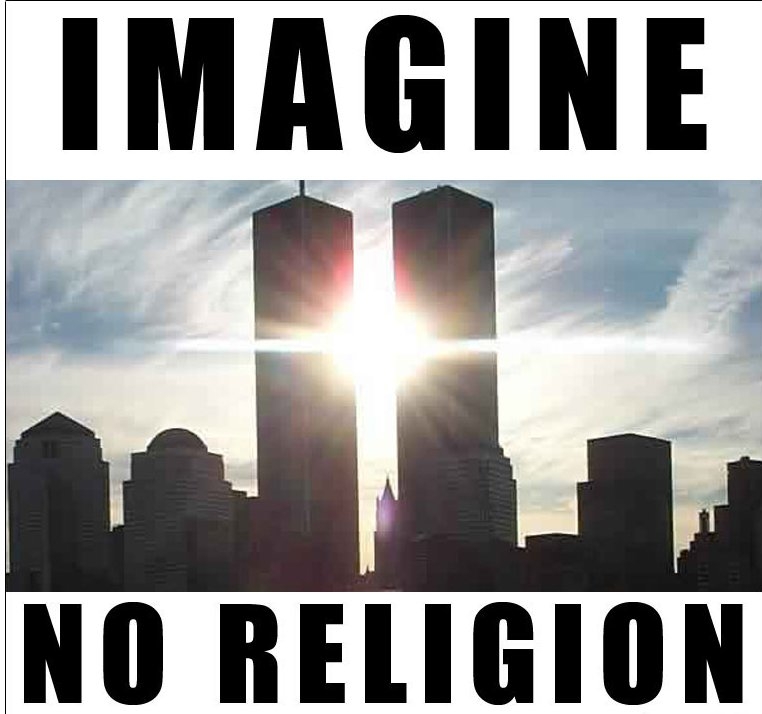 On the 7th anniversary of the attacks on the World Trade Center in New York, the two candidates vying for the most powerful job in the world are set to disgrace the site of the fallen towers in a political gesture. They will make speeches and call on the powerful emotions of patriotism and vengeance and they will proclaim again that they will not rest until the perpetrators are brought to justice.

Across the United States, people will remember the tragedy and mourn the loss.

But no political leader in all the democracies in all the world will utter the words that describe the real motivation behind the attacks that killed those people that terrible morning. RELIGION.

Forget about all the socio-political arguments. When it comes down to it, the one thing that makes an otherwise rational human being wish to leave this wonderful life for a fairy tale promise, is religion.

The popular opinion is that we cannot blame religion; we can blame the individuals, we can blame their culture, we can even blame their particular religion, but no- we can’t blame religion in general! What is usually forgotten is that institutions can be worse than individuals. Benjamin Franklin was a good man. Jefferson was the kindest of persons. And yet, they both owned slaves. To quote Noam Chomsky (in a different context), “…you want to distinguish between the institution and the individual”. Slavery as an institution was evil, but the people who practiced it weren’t all bad. Similarly, people who practice untouchability are not inherently bad, it is the beliefs that organized Hinduism imposes on them that is the problem.

We could start changing things by recognizing the viral beliefs in our culture that lead to so much suffering. Let us hope that future cultures will look back at this period in history, in the same way we look back at slavery, and wonder how it was possible for such kind-hearted people to be tarnished by such an ugly institution as organized religion.