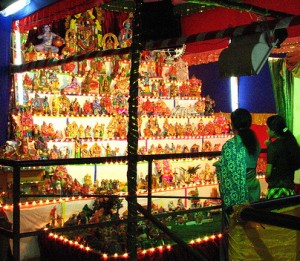 My two school going daughters are now learning more about Indian mythology — in their schools, comic books, TV shows and cartoon movies. The fresh perspective they bring in when they are learning Indian mythology is very interesting. I’d like to share some examples here.

Let me first set the context about what they are learning at school and what I tell them at home. As expected of most schools in India, their school teachers are teaching them the usual stuff about the all-powerful omniscient God, prayers, “God will punish you”, hell, heaven etc. They are doing a pretty good job of indoctrinating the fear of God.Don’t get me wrong, it is a very good school and I’m very happy with it and strongly recommend the school. I have not seen any non-believing school in India – so I’m living with what we’ve got now. I’m hoping to see secular schools becoming prevalent during my lifetime. When my children talk to me about God, I tell them what I really think and that once they grow up and learn more, they will have a better picture.

Anyway, back to the topic. So we are watching the cartoon movie on Ganesha. Both my daughters are thoroughly enjoying it. Being children, they are very inquisitive and ask tons of questions. We are watching the part where Parvati asks Ganesha to guard the door while she is taking her bath. Shiva returns, doesn’t know who Ganesha is, and asks Ganesha to let him go inside. First question: How come Shiva, being a God who knows everything, does not know that Ganesha is his son? My answer: it’s just a story, don’t take it seriously. Just watch and have fun.

By the way, I’m very happy to introduce religion and God to my children. Religion is an important part of our culture – like movies, music, alcohol, cigarettes etc. I believe that exposing them to all aspects of life at the appropriate age will help them lead a happier and enriched life. Clearly, they are too young for topics like sex, models of economy (capitalism, free market, socialism, communism etc), but they are old enough to appreciate that tooth fairies do not exist, and our mythological stories are stories like Cinderalla or Snow white and not real.

Back to the movie. They watch the fight between Ganesha and Shiva’s hordes, Nandi and other gods. They are very pleased that Ganesha single-handedly thrashes them all. Eventually, Shiva fights with Ganesha and chops his head off. My younger one is shocked! She can’t understand what just happened? Question: How can Shiva kill his own son? Why is he such a mean god?

The movie goes on and we are the point where Shiva’s hordes have gone in search of an animal to bring its head to Shiva. They find a baby elephant and chop it head. My younger one cannot stop her tears. She is very upset about the death of the cute baby elephant. Question: Why did they have to kill the poor baby elephant? Why can’t the all powerful God Shiva just bring Ganesha back to life?

This was a very disturbing movie for my kids, though it was a cartoon movie supposedly designed for kids. The other examples I’m going to share are not so depressing. Some are even funny. So read on. We are members of a good library here and the kids get to read Amar Chitra Katha story books. They enjoy the stories and I enjoy reading with them. They’ve read stories about various Rakshasas like Mahishasura, Bhasmasura, Hiranyakashyapa etc. The plot in these stories usually follows a very simple formula. A Rakshasa does a severe penance for several thousand years and impresses the hell out of Lord Brahma and gets a deadly boon from him. Using the power of this boon, he unleashes his fury on all mankind and godkind. Eventually, some major god like Vishnu, Shiva or Durga finds a loophole in the boon and kills the Rakshasa. Very imaginative and thoroughly enjoyable stories. But what my children cannot digest is how Brahma can be such a dumb God. Clearly, he should learn that giving boons to Rakshasas is the root cause of all these problems. Then why does still keep granting boons to them? Valid question. I agree with them that Brahma may not be the smartest of Gods.

And, they are unable to understand Indra too. How can he be the king of Gods, if every Tom, Dick and Harry Rakshasa can defeat him easily and make him run for his life? Fortunately, they have still not encountered the baser elements of Indra where he violates chaste married women. Maybe Indra is the inspiration for our current day religious leaders who in the news for sexual assault cases on women and children. If Indra can do these activities and get away with it, they sure can too.

The other cartoon movie I’d like to talk about is ‘Return of Hanuman’. It’s a very nicely made movie with high quality graphics, very good production, and very good dialogues (some very funny ones too). I recommend watching it. The villain in the movie is ‘pollution’/‘global warming’ which is going to destroy mankind unless we start taking steps towards protecting the environment. Very thoughtful of the movie makers to include a social message. They have taken several liberties with the Gods, I guess under the protection of ‘poetic license’, to make the movie funny. I’ll mention some of them here. Watch the movie for several more!

Hanuman needs to take an avatar on earth to protect the world. He is in heaven and is trying to figure out a good place for his avatar to be born. So how does he do it? He uses an application similar to Google maps on something similar to Microsoft Surface. He clicks using his finger to zoom in and zoom out of India and identify the location!

I couldn’t help notice that all of our mythological stories have included technology of their times (in addition to the imaginative magical powers too, which is common throughout various mythologies). That’s why all the battles are fought using bows and arrows, spears, swords etc and they wear dresses like the dhoti and Sari, not jeans.

In ‘Return of Hanuman’, there are battles between Gods and Rakshasas that are fought using the older weapons. However, there was one funny twist. In almost every mythological movie, there has to be at least one ‘astra’ fight. The Rakshasa will hurl an ‘Agni’ astra and it will go towards the god spitting fire. The God would then hurl the ‘Water’ astra (I forget its name – is it Varuna Astra?) which will annihilate the fire. So I was not surprised when a Rakshasa hurls an Agni astra at Vishnu. What surprised me was Vishnu hurling his ‘Fire Extinguisher’ astra which sprays carbon dioxide and extinguishes the fire.

Another technology that is slipped into this movie is the watch. The scene: the gods are having a council on how to solve a problem on earth. Vishnu looks at his watch and says that there is not enough time to take an avatar, so we must find someone who has already taken an avatar and commission him for this task. Of course, this happens to be Hanuman.

Another innovative change is Garuda. Garuda is not an eagle, but a single-seater airplane!

I guess this is how the different versions of our epics might have evolved. Valmiki might have written a version of Ramayana and then others such as Tulsidas, Kamba must have used their poetic licenses to come up with their own modified versions. And now we have fights over which is the authentic one. If ‘Return of Hanuman’ becomes successful and survives for a long period, I can imagine religious zealots of the future protesting vehemently when the future artist uses his poetic license and modifies ‘Return of Hanuman’ to adapt to the social conditions of those times. I do hope mankind would have advanced enough not have any religious zealots in the future.