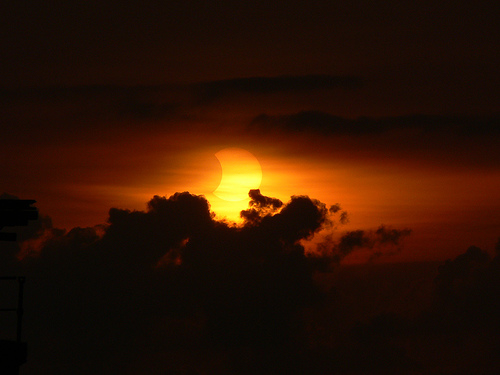 The month, opened with a solar eclipse on the very first day. This was partial over India, but seen in totality in many parts of the world. The minor nature of the eclipse did not prevent the doomsayers from having a field day. The degree of the eclipse was not important they said, but the very occurrence of the event would cause problems.

The worst was the lunar eclipse was that to follow within a fortnight. In the middle of these events would come the date 08/08/08. These events are the astrologer’s dream come true! They could predict calamities for the whole world and worst for those whose as(s)trological signs would fall during that period. They predicted rashi dosha(fault with the zodiac sign), nakshatra dosha (fault with the birth star) for a good percentage of the population and warned them of the catastrophes that would befall them. However all was not lost there was redemption. That was of course, a pooja for the relevant gods and offerings to them. That could prevent the ill effects of the eclipses and also result in prosperity by turning the tables on those who cause the very evil effects. The latter part was very true but the beneficiaries of the prosperity were not those whose as(s)trolgical signs were at fault.

As you would have already guessed the priestly class, were the ones most benefited. This was all apparently based on the latest scientific findings. They claimed that the scientist was not of our desi variety, but one from the west who had discovered that some rays are emitted during eclipses which have very “evil” effects on all living things. So, the wisdom of the ancients had been proved by unknown “scientists” who were unheard of in any scientific circles or whose findings published in any peer-reviewed journals.

Of course all that was due to a conspiracy of “Western science” which wants to deny the due place to the wisdom of our ancients. The due wisdom of our ancients had accorded the ‘center of the universe’ status to the earth and their infinite wisdom had grouped Rahu, Ketu (the eclipses), the sun (a star) and the moon (a satellite) all as planets and listed them as nava grahas – the nine planets.

The streets were deserted as all people preferred to stay indoors, all activities came to a stand still and we are told that many people stopped breathing the eclipse-polluted air to prevent the contamination entering their bodies. No food and water was consumed during that period, except by a few fool-hardy souls like us, including most of the members of the Mangalore Today team who ate heartily suspending their diets, exposing the food and drink to the deadly poisonous rays emitted by the sun. In addition, all these activities were carried out standing in open air and directly exposing ourselves (those parts not covered by clothes) to the deadly radiations emitted by the eclipsed sun. Despite of all of this, no ill effects were reported by any except for the editor of Mangalore Today and yours truly complaining about a burning sensation on the tops of their heads. But, as Mahesh Nayak remarked, this was not due to the solar radiation but due to two other well known facts- the lack of hair on the head and all that grey matter on the inside!

Anyway, no ill effects have been reported by those who have partaken food and drink exposed to the deadly solar rays which supposedly emanate only during eclipses. In fact, yours truly has been consuming food exposed to the total solar eclipse observed in 1980. Of course the only catastrophe which has happened to him since is that got married that year and according to his better half the disaster was hers.

The lighter aspects apart, it is feared by the believers that pregnant women will either abort or deliver babies with congenital abnormalities if they go out during the eclipse. All food and water that’s  contaminated has to be thrown out. However, the same is not applicable to water in rivers, tanks or other reservoirs! This is probably due to a critical mass of water being needed to avoid the effects of the radiations. That makes perfect sense. Most threw out cooked food and started cooking only after the eclipse had passed. Here too the problem is only for cooked food. The uncooked food is not affected. Again, for cooked food there is a way of decontamination too. If one puts a bit of a special grass called garike the contamination can be neutralized. That is exactly what many Indians did in-fact do.

Hindu temples did roaring business, but no such luck for other places of worship. Despite their adherence to all other sorts of superstitions, eclipses do not affect Christians and Muslims and hence there were no special prayers at their places of worship! There were pujas, yagas, yagnas going on every where each claiming that theirs was the one which would shield the country from the ill effects of the eclipse. Those whose birth stars lay in the period of the eclipse had to perform special rituals to rid themselves of the evil influences and of course like all other things in this world, nothing’s free. After the eclipse had passed people took a ritual bath to get rid of the pollution. But, what about the blood circulating, in the cardio-vascular system? Would that not be contaminated too? When the question was posed to the eclipse “experts”, they got angry and replied that the washing of the body will get rid of all the contamination related to the event! Why not apply that to the kitchen and wash everything instead of throwing away cooked food. Then follows the excuse that we are to follow the path of our ancestors.

China, India and the number 8:

The same was applied to the “magical” date 08/08/08. I watched an eminent astrologer expounding at length on some TV station about the years when all the 8s were dominant and the world shaking events that happened during them. However, he conveniently said nothing about those years when there were no 8s and yet the worst events had occurred. The Chinese on the other hand had no problems with these numbers. They considered them lucky. The opening ceremony of the Olympics started at 8.08 Pm on the 8th of August, 2008! So, we cannot claim a monopoly to gullibility. In fact it was reported that the maximum number of marriages took place on that day in China. So, what is lucky for one group of superstitious people can be unlucky for another group.

Now comes double jeopardy. The Lunar eclipse is scheduled for the 16th of August. It is like rubbing salt on the wounds. A solar eclipse is bad enough, but a lunar one following soon after would result in mayhem. It could be the last word on disasters. That is what we have been threatened with by the forecasters of doom. In the coming year there are going to be floods, earthquakes, wars, plagues and pestilences unlimited.

The world may come to an end. Well if it does not. Then it will be due to the religious ceremonies performed which have caused the ill effects to be neutralized. That is astrology for you. Heads I win, tails you lose. Though it is claimed that what is put down in the horoscope cannot be changed even by gods, there are rituals which are more powerful that the gods themselves. Following these rituals strictly would ensure that the evils are totally neutralized or mitigated. For example if the evil influences wanted to take someone’s life, the performance of appropriate rituals could result in them causing a minor accident to the threatened individual, but not end in their death. If this is not gullibility then what can it be? 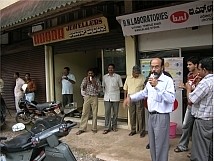 I’m reminded of an anecdote related by the eminent philosopher Bertrand Russel. It’s about a drunken man shouting at the top of his voice late at night in Hyde park in London. When he was accosted by a policeman the man remarked that he was shouting a magical incantation to drive away the wild elephants. When the policeman told him that he must be crazy since the nearest wild elephant was thousands of miles away in Africa, he replied saying that it showed the efficacy of his ritual! So too are the claims of our astrologers.

Finally, one of guests of the Mangalore Today solar eclipse party wondered whether there would a similar celebration for the lunar eclipse. The reaction from another guest was that he would like to watch two eclipsed moons lying on his back after having fulfilled his spiritual longings. Since most of the guests present were very spiritual people, yours truly who has limited financial resources had to request them to look for some other host!